Do We Have a Right to Know What is IN Our Food?

Well, there are a few big guys who think we do not have that right, and they have deep pockets to throw around to protect their profits.

I was so heartbroken that the GMO labeling initiative in California was defeated in 2012, and it would be miraculously historic if we Coloradans can get it passed. We can do it! I am so out of touch with everything that I did not even know it was on our ballot until a couple of weeks ago.

I am sure there are people in your circles who live in Colorado or Oregon who also might not know, so please share to get the word out!

“Last week, Measure 92, the mandatory GMO labeling initiative in Oregon, became the costliest ballot measure in state history when Coca Cola donated $468,000 to the opposition campaign. Coca Cola is only the most recent donor in a string of “Big Food” and biotechnology companies supporting the opposition campaigns, joining corporate food giants like Kraft Foods, PepsiCo, and the largest donor, agrochemical behemoth Monsanto in flooding the airwaves with $11.1 million worth of attack ads in the weeks leading up to the election.” read article

“In the past two years, the world’s largest chemical and biotech seed companies and America’s giant food manufacturers have spent nearly $70 million to defeat GMO labeling initiatives in California and Washington State. In the past 6 months, DuPont, Dow Chemical, Monsanto and food manufacturers Pepsi, Coca-Cola and General Mills have spent more than $27 million to block GMO labeling at the federal level, which is roughly 3 times their spending in all of 2013.” article from Right To Know Colorado

Over the last two years, the world’s largest chemical and biotech seed companies and America’s giant food manufacturers have spent nearly $70 million to defeat GMO labeling initiatives in California and Washington. In just three weeks, those opposed to Proposition 105 raised $1.4 million, dwarfing the $22,000 raised by Right to Know Colorado.

While these spending differences are staggering, Right to Know Colorado’s statewide grassroots support will continue to fight for greater transparency in our food system through this GMO labeling initiative despite the well-funded corporate opposition…” Monsanto Spends Millions to Defeat GMO Labeling

When talking to people undecided about this issue, there are a few simple talking points: 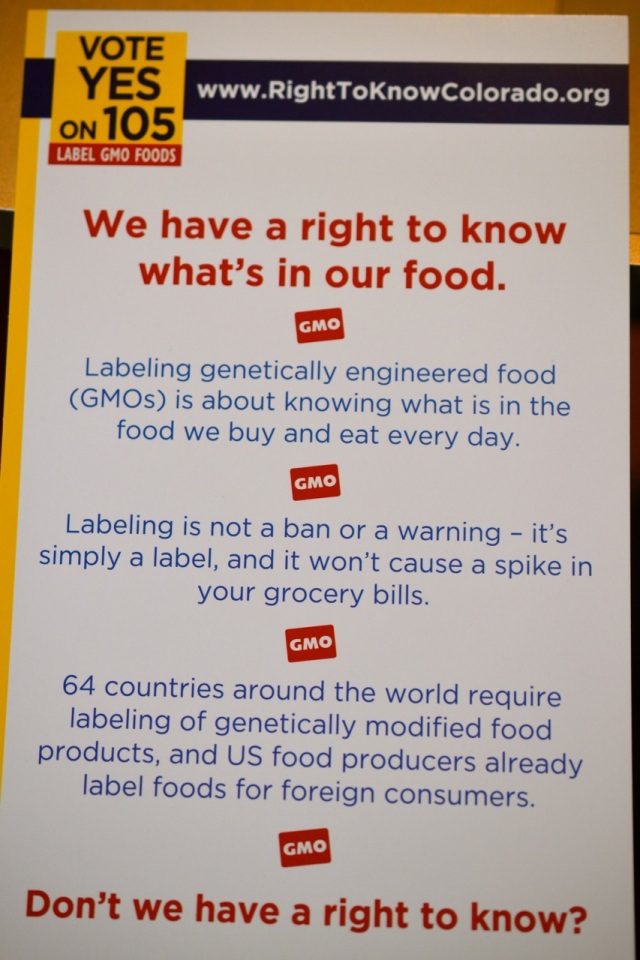 I think it is wonderful that the restaurant chain Chipotle cares about what goes into the food they serve, and hope that many people will reward them by frequenting their restaurants.

“DENVER – October 14, 2014 – Chipotle Mexican Grill (NYSE: CMG) is urging Colorado voters to vote “yes” on Proposition 105, the ballot initiative that would require mandatory labeling of genetically modified organisms (GMOs) in food across the state, subject to some exceptions. Chipotle is already voluntarily labeling GMO ingredients in its food, and is actively working to eliminate GMOs from the ingredients it uses to make its food…” read full article

So please share on Facebook or other social media, and by email to those living in Colorado and Oregon to get the word out.

Don’t forget to mail your ballots back because don’t you think we have a right to know what is in our food, even though Big Food, Big Farm and Big Pharm don’t want us to know?