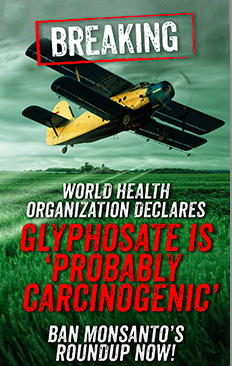 It’s time to get Monsanto’s Roundup off your plate, Ban glyphosate and Label GMOs!

Just this morning, Congress reintroduced the Pompeo bill that would outlaw state GMO labeling bills and make labeling of genetically engineered foods a “voluntary” process, with the USDA and FDA in charge. Incredibly, this comes less than a week after the world’s leading cancer agency declared that the main ingredient in Monsanto’s Roundup is linked to cancer in humans. This is an outrage!

​As you ​know, 99% of GMO crops grown around the world are genetically engineered to either be resistant to Roundup or contain their own pesticides. We nee​d Congress to stand up for our health and the future of our children and food supply today!

ACT NOW: Tell the EPA to ban glyphosate and tell Congress and the White House it’s time to label GMOs! Every voice counts!

Late last Friday afternoon, March 20th, the World Health Organization (WHO) made a stunning announcement, declaring that the main chemical ingredient in Monsanto’s best-selling weedkiller Roundup – Glyphosate ­­– has the potential to cause cancer in humans. This announcement should have parents and elected officials across the world very concerned, since according to WHO,​ glyphosate is used in more than 750 different weedkillers and is routinely detected in the air during spraying, in water and in our food.

This comes after decades of propaganda by Monsanto and vocal GMO promoters, who have repeatedly claimed that both Roundup and glyphosate were perfectly safe, including such declarations that Roundup is “safer than table salt” and so safe, you can “drink it”.

Incredibly, because of the widespread adoption of GMO crops for food production, an estimated 75% of processed foods in American grocery stores contain ingredients from genetically engineered crops, such as corn and soybeans, that have been engineered to survive being sprayed with ​high doses of Roundup.

Alarming details in the new World Health Organization report confirm past scientific studies that point to real harm from the overuse of glyphosate. According to the report, published in the prestigious journal Lancet Oncology, the main ingredient in Monsanto’s Roundup is linked to non-Hodgkin’s lymphoma (NHL) and lung cancer in humans and there is “convincing evidence” that glyphosate can cause cancer in lab animals.

According to the new report by the International Agency for Research on Cancer (IARC), widely considered the gold standard for carcinogenicity review, scientific experts from 11 countries reached this conclusion after working for more than a year to perform “a comprehensive review of the latest available scientific evidence”.

After a rigorous review, the International Agency for Research on Cancer’s 17 member working group concluded that the chemical glyphosate should be reclassified as a Group 2A substance, meaning “Probably carcinogenic to humans”. The IARC stated that there was sufficient evidence of carcinogenicity based on laboratory studies.

While the IARC’s announcement is ground-breaking news, the fact that an estimated 80% of GMO crops worldwide are engineered to be sprayed with Roundup is alarming.

Why you should be concerned: Roundup is Everywhere!

Glyphosate is the main chemical ingredient in Monsanto’s most widely used weedkiller on the planet, used for agriculture, home gardens, state parks and roadways, and is currently being sprayed on hundreds of millions of acres around the world, mainly due to Monsanto’s claim of its safety.

While Monsanto originally introduced Roundup​ in 1974 as a broad-spectrum herbicide, it wasn’t until Monsanto’s invention of Roundup Ready® GMO crops that sales escalated.

Since GMOs were first introduced in 1996, the six main commodity crops have been genetically engineered to survive massive sprayings of Monsanto’s Roundup or glyphosate. These GMO food and agricultural crops include Roundup Ready® corn, soybeans, sugar beets, cotton, canola and alfalfa that are either in our food as processed ingredients or are routinely fed to livestock as the main part of their diet.

Contrary to widely repeated industry selling points, rather than reducing herbicide use, a 2012 Washington State University study published in Environmental Sciences Europe found that GMO crops have led to a massive increase in the spraying of Roundup on agricultural farmland.

In the first fifteen years since Monsanto’s Roundup Ready® GMO crops were introduced, the study found that between 1996 and 2012, the application of glyphosate has skyrocketed by more than 527 million pounds.

Monsanto’s Roundup Is in our Food, Air and Water

If being unlabeled in 75 percent of processed food sold in the U.S. weren’t bad enough, a recent study published in June 2014 in the journal Environmental Toxicology and Chemistry found that glyphosate could be detected in more than 75 percent of air samples.

The study was conducted by the U.S. Geological Survey and found that glyphosate, as a result of agricultural application on GMO crops, was found in 86 percent of air samples and​ 77 percent of rain samples in 2007. The air and water samples were taken​ in the year 1995, before Roundup Ready® GMO crops were introduced. In 2007, in Mississippi and Iowa, one of the study’s authors claimed that glyphosate “was found in every stream sample examined in Mississippi”. Makes you feel safe, doesn’t it?

So not only are millions of tons of glyphosate being sprayed in millions of acres of farmland across the world, but it’s literally in the water we drink and the air that we breath!

Take Action: Tell Congress, President Obama and the EPA that it’s time to ban Monsanto’s Roundup and label GMOs! We can’t wait until there’s a smoking gun. What we already know it alarming enough. Every voice counts!

I​t’s difficult to imagine the impact on our children, particularly in agricultural communities. Once and for all, Congress and our regulatory agencies need to know that our children are not science experiments!

Thanks for participating in food democracy,

6. “Impacts of Genetically Engineered Crops on Pesticide Use in the U.S. — The First Sixteen Years”, Environmental Sciences Europe, September 28, 2012
http://www.enveurope.com/content/24/1/24

Sugar Shocked? The Rest Of Food Industry Pays For Lots Of Research, Too