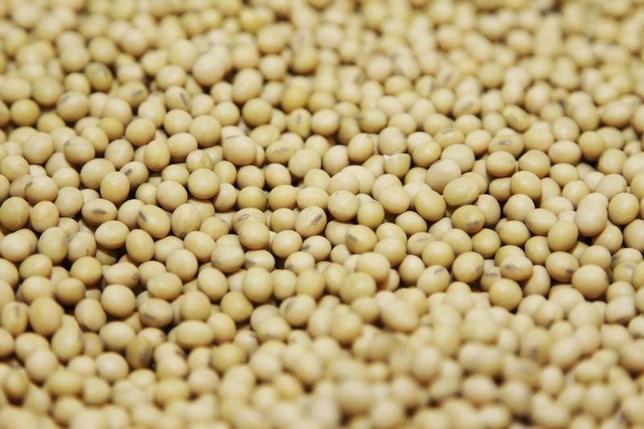 A bushel of soybeans are shown on display in the Monsanto research facility in Creve Coeur, Missouri, July 28, 2014.
REUTERS/TOM GANNAM

Across the U.S. Farm Belt, top grain handlers have banned genetically modified crops that are not approved in all major overseas markets, shaking up a decades-old system that used the world's biggest exporting country as a launchpad for new seeds from companies like Monsanto Co.

"I think that would be the safest thing for the supply chain," he said. CHS implemented a policy last year under which it will not sell seeds or buy grain that contains traits lacking approvals needed for export.

The U.S. farm sector is trying to avoid a repeat of the turmoil that occurred in 2013 and 2014, when China turned away boatloads of U.S. corn containing a Syngenta AG trait called Viptera that it had not approved. Viptera corn was engineered to control insects.

Cargill Inc [CARG.UL] and Archer Daniels Midland Co each said the rejections cost them millions of dollars, and both companies have sued Syngenta for damages. ADM is refusing GMO crops that lack global approval. Cargill did not respond to requests for comment.

The United States is the biggest producer of GMO crops and has long been at the forefront of technology aiming to protect crops against insects or allow them to resist herbicides.

That innovation is now seen as a risk to trade because it is hard to segregate crops containing unapproved traits from the billions of identical-looking bushels exported every year.

"It's an uncomfortable position for the industry when there are traits out there that haven't had major market approval," he said in an interview.

The latest crop being banned is Monsanto's Roundup Ready 2 Xtend soybean, whose seeds are genetically engineered to resist the herbicides glyphosate and dicamba. It is being sold for the first time in the United States and Canada this year despite lacking clearance from the European Union, an important export market for North American soybeans.

Monsanto said it expects EU approval soon. It initially projected farmers would plant the seed on 3 million acres in the United States, roughly 4 percent of overall plantings, and 420,000 acres in Canada.

Plantings have already begun in North America, and Monsanto spokeswoman Trish Jordan said that each passing week without EU authorization lowers the forecast for acreage in Canada.

The company is allowing growers to switch to another variety and has not yet shipped Xtend seeds to farmers who have ordered it in Canada. Monsanto has not publicly lowered its U.S. forecast.

ADM, Bunge and CHS have said they will not accept Xtend soybeans until the trait is fully approved by major markets. Bunge also declined to accept Viptera corn before China cleared it in December 2014.

The company's list of banned traits on its yellow posters contains products from Monsanto, Syngenta, Dow AgroSciences, Stine Seeds, DuPont Pioneer and Bayer, many of which are not commercially available to farmers yet.

CHS has its own list of restricted traits that includes products from Monsanto, Syngenta and DuPont Pioneer.

Seed companies, including Syngenta and Dow, are addressing industry concerns by selling biotech products under programs that restrict where growers can deliver their harvests to keep crops out of unapproved markets.

Farmers also produce crops containing biotech traits from Monsanto and DuPont Pioneer under contracts with end users that designate approved locations where they can be delivered.

However, such approaches are not fool-proof methods of protecting the supply chain, Anderson said.

Stine Seed and Bayer said they have policies against selling seed traits that lack approvals in major export markets.

Bayer this week seized on concerns about Monsanto's launch of Xtend soybeans to promote its own brand, LibertyLink.

"Soybeans, once considered such a simple crop to grow and market, is becoming more complicated," Bayer said. It called the situation faced by growers "downright confusing."