Journalists should be more skeptical of “experts” 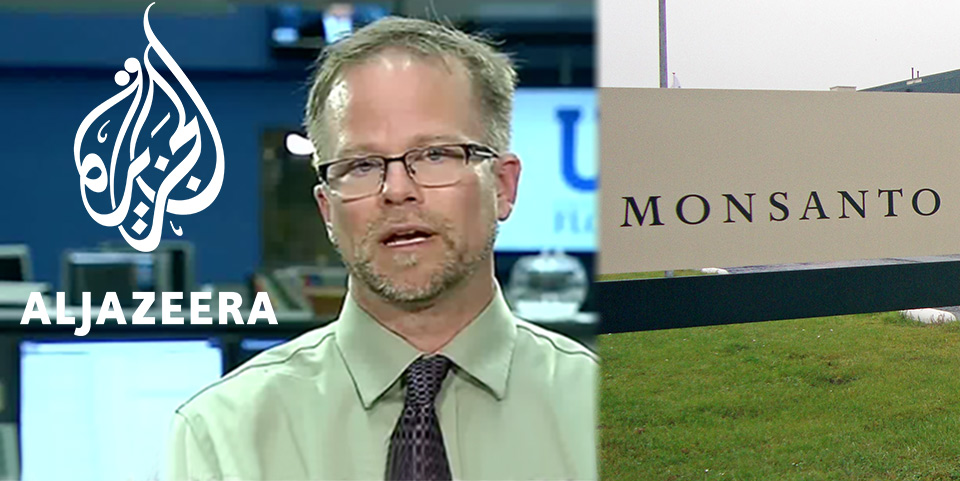 In a pro-GMO article, Al Jazeera fails to notice Kevin Folta’s links to Monsanto and presents him as an independent scientist

In the article below from the New York Times, Robert Faturechi of the public interest newsroom ProPublica makes the important point that journalists need to be more skeptical of experts and check out any conflicts of interest before accepting their views as impartial.Lack of such skepticism is a problem that’s especially rife in the GMO field. Recent examples are reports from Al Jazeera, which in the past has gained a good reputation for balance but which recently has shamed itself by publishing uncritically pro-GMO articles. One Al Jazeera article hypes the supposed success of GM Bt brinjal (eggplant) in Bangladesh without addressing reports from within the country that the crop has suffered widespread failure.The second Al Jazeera article repeats the meme that people who oppose GM crops are anti-science. The article appears to include Kevin Folta as one of the “independent scientists” of the subtitle, who are supposedly holding the fort of science against the onslaught of ignorance from the anti-GMO “mob”. The article allows Folta to describe himself as “non-affiliated with industry” and quotes him as stating, “I'm no big corporate friend. I look at the data, and we make the decisions. We try to distill, for the public, what does the science tell us? Frequently it tells them a story they don't want to hear." Yet the story makes no mention of the fact that Folta has been revealed as soliciting $25,000 from Monsanto for his outreach work on GM crops while repeatedly claiming to have no connections to the company. While Folta was presenting himself to the public and media as an independent scientist, he was privately telling Monsanto, “I’m glad to sign on to whatever you like, or write whatever you like.”One might be forgiven for thinking that far from telling the public an uncomfortable truth that they don’t want to hear, Folta specialises in telling the public what Monsanto wants them to hear.Just how Al Jazeera missed the Folta scandal is hard to understand, as it even made it onto the front page of the New York Times, as well as being all over social media for months.—

Journalists need to be more skeptical of experts

Robert FaturechiNew York Times, 10 August 2016http://www.nytimes.com/roomfordebate/2016/08/10/think-tanks-and-the-influence-of-corporate-dollars/journalists-need-to-be-more-skeptical-of-experts?smid=tw-share[links to sources are at the URL above]When South Carolina legislators were considering whether to require fire sprinklers in all new homes, the mandate’s opponents pointed to a damning study: A researcher at one of the state’s top universities predicted that 17,000 families would be priced out of the housing market if the rule were adopted. The stat helped sink a safety measure believed to drastically reduce home fire deaths.But the regulation’s opponents frequently left out a crucial fact. As we at ProPublica learned through public records requests and other reporting, the academic who came up with the stat was “a member and ardent supporter” of the homebuilders trade association, the powerful lobby that was fighting the regulation. He also helped run a marketing firm that does work for homebuilder groups.Had lawmakers and other state officials known about that conflict, they may have dismissed his research. They may have given it less weight. Or, they may have embraced it just as enthusiastically. Either way, they would have been better equipped to make an informed decision.It’s our job as journalists to make sure that lawmakers and the public aren’t making major policy decisions based on compromised studies. Big name universities and prestigious think tanks provide researchers with an imprimatur of independence. But as The New York Times and other outlets have shown, their work is often funded, and sometimes shaped, by special interests with a rooting interest in particular findings. Reporters and editors need to be more skeptical of experts, and the false sense of security that their name brand affiliations provide. Before we quote them or their studies, or publish their op-eds, we have to ask harder questions about their funding and their outside employment.Oftentimes simply asking won’t be enough. When the research is being done at a public university, we have an easier time digging up undisclosed conflicts. Emails between professors and their funders are typically subject to public records requests. Those communications can be revelatory, but they’re harder to come by when the researchers are working for private think tanks. In those cases, we have to rely on less straightforward entry points, like think tank researchers happening to communicate with government officials who are subject to FOIA. Or we have to hope for leaks. Neither method is particularly reliable.Research that is funded by a corporation, or any other special interest for that matter, isn’t necessarily flawed. And researchers who are moonlighting for outside groups aren’t necessarily untrustworthy. But lawmakers and the public deserve more visibility into the research that is shaping policy in Washington and in statehouses across the country. Investigative reporting is one remedy. Another would be stricter transparency rules.Robert Faturechi is a reporter with ProPublica, where he covers campaign finance, lobbying and politics.

Pesticide Use on Genetically Engineered Crops