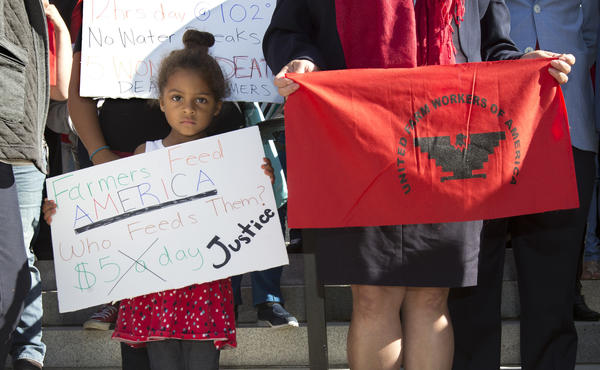 Tensions flared at the state Capitol on Thursday after the state Assembly abruptly adjourned without taking up its most anticipated piece of legislation of the day: a bill that would expand overtime pay for thousands of California farmworkers.

Another showdown over AB 1066, a bill authored by Assemblywoman Lorena Gonzalez (D-San Diego), had been expected in the lower house after a similar proposal died in June four votes short of the majority it needed to pass.

But lawmakers said they would wait until Monday to keep working with members to garner the support. The lack of action on Thursday suggested they were having trouble mustering up the votes needed for it to pass.

Leaders with the United Farm Workers of America initially exchanged terse words with Assemblyman Eduardo Garcia (D-Coachella) outside the chambers over the decision to wait.

"We are on the same team," Garcia assured them, as labor leaders said dozens of farmworkers had given up their time and wages to be at the Capitol for the vote. "At the end of the day we are all trying to make sure this happens. We are going to get the 41 votes."

Gonzalez later met privately with more than 10 members of the labor union, as dozens of farmworkers waited outside, singing songs and chanting for about an hour, "Sí Se Puede" and "Overtime."

Assembly Speaker Anthony Rendon then addressed the crowd, assuring farmworkers that legislators would take up the issue next week.

The United Farm Workers association, which sponsored it, argues the legislation addresses an injustice farmworkers have lived with since they were first exempted from federal minimum wage and overtime standards nearly eight decades ago.

But prominent business groups, led by the California Farm Bureau Federation and a coalition of agricultural producers, have thrown their political weight against it, saying the legislation saddles farmers and growers with higher costs.

"If overtime rules change, farmers would likely adjust work schedules to avoid overtime or take other actions, such as reducing acreage, switching crops or looking for machines that can replace people," said Dave Kranz, a spokesman from the California Farm Bureau Federation. "In any of those scenarios, unfortunately, employees would lose work hours."

The proposal would roll out new rules for overtime in 2019, lowering the current 10-hour-day threshold for overtime by half an hour each year until it reaches the standard eight-hour day by 2022. It also would phase in a 40-hour standard workweek for the first time.

Before the vote, nearly 250 farmworkers gathered on the south steps of Capitol. They came from the Central Valley and Napa and Sonoma counties, where they harvest grapes and tree fruit, to the Central Coast, where they fill baskets of strawberries, vegetables and mushrooms.

UFW president Arturo Rodríguez said the workers had sacrificed a day’s wages to lobby in support of the bill.

Sylvia Huerta, 70, said she and her two friends woke up at 3 a.m. to feed their children and board the bus to Sacramento at the crack of dawn. They have worked in the fields for more than 20 years, picking lettuce and broccoli, she said, and rarely if ever receive any overtime under the state's limited laws.

“It is hard on women like us, mothers and workers,” she said.

Tell The FDA to Not Destroy Organics