Environmental destruction and landgrabs could lead to governments and individuals being prosecuted for crimes against humanity by the international criminal court following a decision to expand its remit.

By: John Vidal and Owen Bowcott

The UN-backed court, which sits in The Hague, has mostly ruled on cases of genocide and war crimes since it was set up in 2002. It has been criticised for its reluctance to investigate major environmental and cultural crimes, which often happen in peacetime.

In a change of focus, the ICC said on Thursday it would also prioritise crimes that result in the “destruction of the environment”, “exploitation of natural resources” and the “illegal dispossession” of land. It also included an explicit reference to land-grabbing.

The court, which is funded by governments and is regarded as the court of last resort, said it would now take many crimes that have been traditionally under-prosecuted into consideration.

The ICC is not formally extending its jurisdiction, but the court said it would assess existing offences, such as crimes against humanity, in a broader context.

The ICC’s policy paper on case selection and prioritisation declares: “The office [of the prosecutor] will give particular consideration to prosecuting Rome statute crimes that are committed by means of, or that result in, inter alia, the destruction of the environment, the illegal exploitation of natural resources or the illegal dispossession of land.”

Land-grabbing has become increasingly common worldwide, with national and local governments allocating private companies tens of millions of hectares of land in the past 10 years.

The anti-corruption campaigners Global Witness say this has led to many forced evictions, the cultural genocide of indigenous peoples, malnutrition and environmental destruction.

“Land-grabbing is no less harmful than war in terms of negative impacts on civilians”, said Alice Harrison, an adviser at Global Witness. “Today’s announcement should send a warning shot to company executives and investors that the environment is no longer their playground.

“The terrible impacts of land-grabbing and environmental destruction have been acknowledged at the highest level of criminal justice, and private sector actors could now be put on trial for their role in illegally seizing land, flattening rainforests or poisoning water sources.”

International lawyers said broadening the priority cases to include land-grabbing would recognise that mass human rights violations committed during peacetime and in the name of profit could be just as serious as traditional war crimes.

“It will not make land-grabbing per se a crime, but mass forcible evictions that results from land-grabbing may end up being tried as a crime against humanity,” said Richard Rogers, a partner in the international criminal law firm Global Diligence.

Rogers has lodged a case with the ICC on behalf of 10 Cambodians alleging that the country’s ruling elite, including its government and military, has perpetuated mass rights violations since 2002 in pursuit of wealth and power by grabbing land and forcibly evicting up to 350,000 people.

“Cambodia is a perfect example for this new ICC focus. It fits in to the new criteria,” he said.

He predicted it could have a bearing on the way business is done in certain countries. “Companies who want to invest in [some] places risk being complicit in crimes against humanity. Tackling land-grabbing will also help address some of the causes of climate change, since deforestation is very often a result of land-grabbing.” 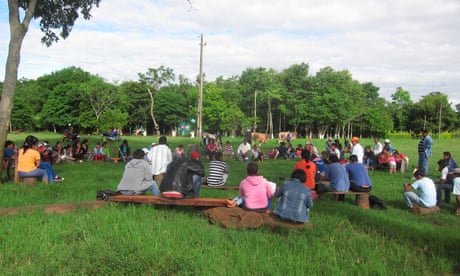 The new ICC focus could also open the door to prosecutions over climate change, Rogers said, because a large percentage of CO2 emissions had been caused by deforestation as a result of illegal land-grabbing.

The ICC can take action if the crime happens in any of the 124 countries that have ratified the Rome statute, if the perpetrator originates from one of these countries, or if the UN security council refers a case to it. Crimes must have taken place after the Rome statue came into force on 1 July 2002.

Reinhold Gallmetzer, a member of the ICC working group who drew up the policy document, said: “We are exercising our jurisdiction by looking at the broader context in which crimes are committed. We are extending the focus to include Rome statute crimes already in our jurisdiction.

“Forcible transfer [of people] can already be a crime against humanity, so if it is committed by land-grabbing – whether as a result or a precursor – it can be included.”

The ICC paper also lists other crimes, such as arms trafficking, human trafficking, terrorism and financial crimes, in which it intends to provide more help to individual states to carry out national prosecutions.

Another ‘Too Big to Fail’ System in G.M.O.s