Arkansas Tries To Stop An Epidemic Of Herbicide Damage

Arkansas’s pesticide regulators have stepped into the middle of an epic battle between weeds and chemicals, which has now morphed into a battle between farmers. Hundreds of farmers say their crops have been damaged by a weedkiller that was sprayed on neighboring fields. Today, the Arkansas Plant Board voted to impose an unprecedented ban on that chemical.

“It’s fracturing the agricultural community. You either have to choose to be on the side of using the product, or on the side of being damaged by the product,” says David Hundley, who manages grain production for Ozark Mountain Poultry in Bay, Arkansas.

The tension — which even led to a farmer’s murder — is over a weedkiller called dicamba. The chemical moved into the weed-control spotlight a few years ago, when Monsanto created soybean and cotton plants that were genetically modified to survive it. Farmers who planted these new seeds could use dicamba to kill weeds without harming those crops.

Farmers, especially in the South, have been desperate for new weapons against a devastating weed called pigweed, or Palmer amaranth. And some farmers even jumped the gun and started spraying dicamba on their crops before they were legally allowed to do so. (Dicamba has long been used in other ways, such as for clearing vegetation from fields before planting.) 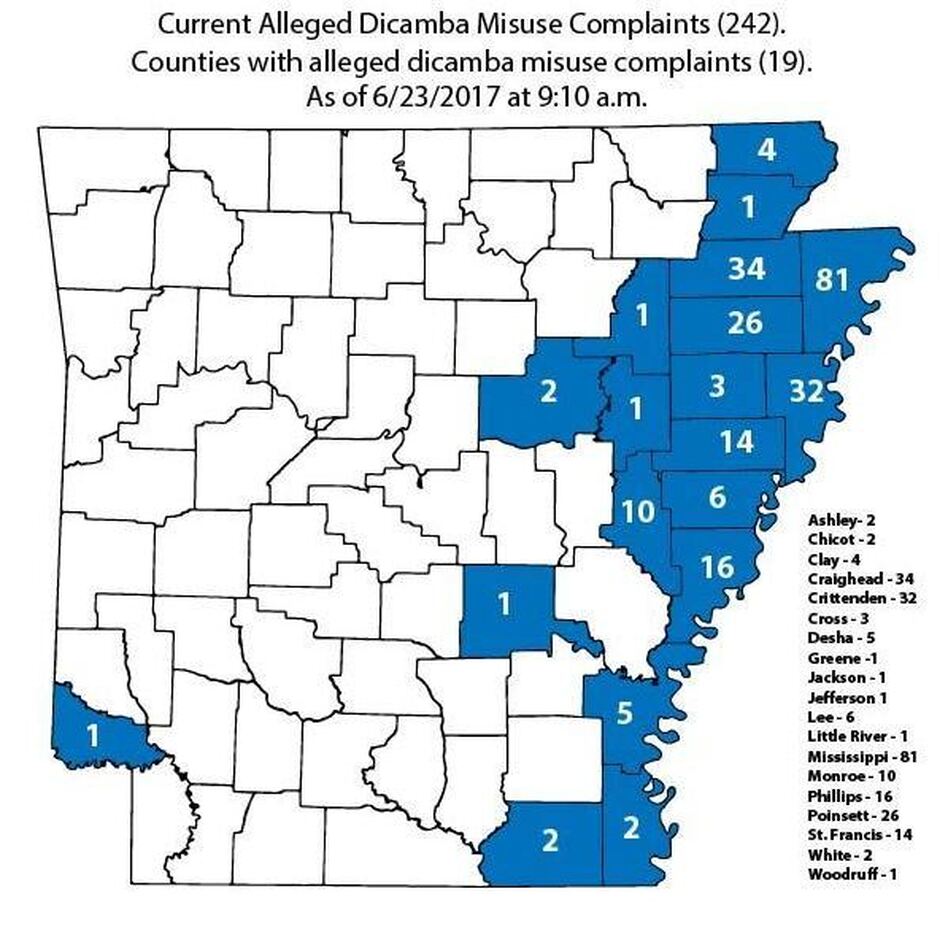 A map showing the number ofcomplaints filed by county. According to the Arkansas Agriculture Department, the investigations into these complaints have yet to be completed.

The problem is, dicamba is a menace to other crops nearby. It drifts easily in the wind, and traditional soybeans are incredibly sensitive to it. “Nobody was quite prepared, despite extensive training, for just how sensitive beans were to dicamba,” says Bob Scott, a specialist on weeds with the University of Arkansas’s agricultural extension service.

As soon as spraying started this spring, the complaints began arriving. By June 23, state regulators had received 242 complaints from farmers who say their crops have been damaged. “This has far eclipsed any previous number of complaints that we’ve gotten, and unfortunately, this number seems to just keep growing,” says Scott. “Every day we get an update with eight or ten more complaints.”

In his area, Hundley says, “any soybean that’s not [resistant to dicamba] is exhibiting damage. I can name 15 farmers within three or four miles who have damage, and I can only name 3-4 farmers who have used the technology.”

On June 20, the Arkansas Plant Board met to consider an emergency ban on further spraying of dicamba, and farmers crowded into the meeting to argue both sides.

At that first meeting, a procedural mix-up prevented the board from holding a valid vote. On June 23, it reconvened and voted, 9-5, to ban any spraying of dicamba on any crops except for pasture land for 120 days. The ban will take effect immediately if the governor of Arkansas signs it.

The decision, assuming it goes into effect, is a hard blow for farmers who paid extra for dicamba-resistant seeds. They now won’t be able to spray dicamba, which they were counting on doing. “A lot of those growers will not have a good option for pigweed,” Scott says.

Even Hundley, who was in favor of banning dicamba, doesn’t feel that it’s an optimal solution. “It’s pitting Arkansas farmers against Arkansas farmers, and that’s never good,” he says.

Looking toward the future, Scott isn’t sure whether dicamba ever will be a good tool for farmers, because it appears to be so difficult to control. “I have walked a lot of fields that leave you scratching your head, how did this happen? Because it seemed like they did everything right,” he says.

He also doesn’t think the problem will be limited to Arkansas. His state just happened to hit this problem first, because Arkansas’s farmers adopted dicamba earlier than those in other states. “Arkansas may be ahead of the curve, but I anticipate other states also having this problem,” he says.