Amish farmers square off against Big Organic in milk battle

By Peter Whoriskey
Washington Post |
Jul 07, 2017 at 11:30 AM
Originally posted by Chicago Tribune 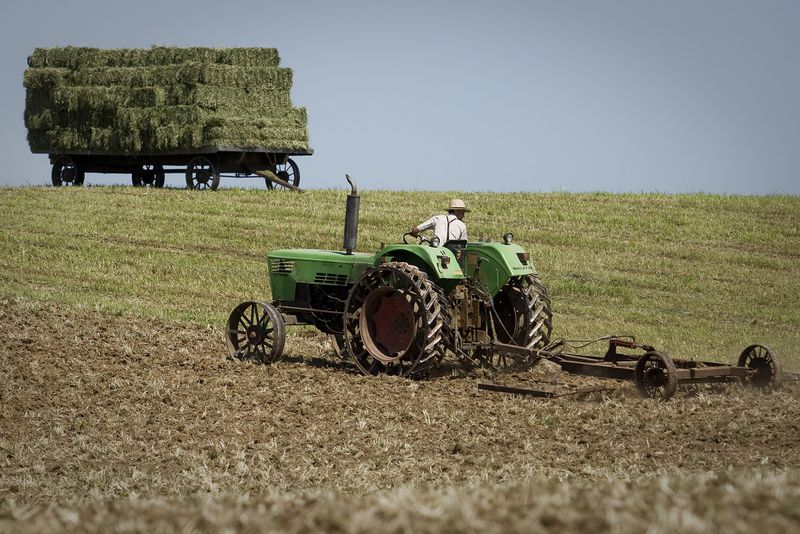 A young Amish farmer tills a field on his steel-wheeled tractor in Kalona, Iowa. Amish farmers say they use steel wheels on their tractors so that they aren’t tempted to drive them on paved roads. (Rachel Mummey / For The Washington Post)

This small town has become a landmark in the organic-farm movement, and it has nothing to do with foodies or hippies.

Instead it has been Amish farmers who, in their suspenders and wide-brimmed hats, have helped develop one of the densest clusters of organic farms in the United States. More than 90 operations certified by the Agriculture Department have emerged within a 10-mile radius, producing, among other things, corn, soybeans, eggs and, perhaps most important, milk.

“This is our living and our way of life,” said Eldon T. Miller, 71, an Amish dairy farmer here. A little over 20 years ago, Miller began holding informational meetings in his basement about organics, and the idea slowly spread across the area.

The question for small organic dairy farmers is how long they can hold out against growing competition from very big dairies producing large volumes of organic milk that, in the view of many here, does not deserve the label.

A glut of organic milk has sunk prices across the United States, threatening livelihoods and rekindling long-standing suspicions that some of the large organic dairies that have emerged are swamping the market with milk that does not meet organic standards. Over the years, some of these very large dairies, most of them in the West, have been cited for violating organic rules by the USDA or inspection agencies. To the chagrin of many here, most have been allowed to continue operating.

Then, last month, The Washington Post reported that one of the nation’s largest dairy producers, Colorado-based Aurora Organic Dairy, a supplier to Walmart, Costco and Albertsons, appeared to fall short of organic grazing standards.

“Nobody’s real happy right now,” said James Swantz, an Amish father of eight who milks about 70 cows here. “We’d like to know what our milk check will be, and right now we can’t tell.”

Over the past year, the price of wholesale organic milk sold by Kalona farms has dropped by more than 33 percent. Some of their milk – as much as 15 percent of it – is being sold at the same price as regular milk or just dumped onto the ground, according to a local processor. Organic milk from other small farmers across the United States is also being dumped at similar rates, according to industry figures.

“At first, when the prices started falling, the guys here were just really mad,” said Phil Forbes, a liaison between the Amish farmers here and the company that buys their milk and sells it under a brand called Kalona SuperNatural, which can be found at Whole Foods and similar grocers. “But it’s been going on so long, they’re telling me, ‘I can’t keep going much longer at these prices.’ What kills me is the customers of those big brands think it’s something like a small Amish farmer who is producing the milk. But the reality is quite different.”

The central issue in the debates over whether the mega-dairies are producing legitimately organic milk revolve around the concept of “grass-fed.”

Organic cows are supposed to be grass-fed during grazing season, and many consumers prefer grass-fed milk in the belief that grazing is more natural, is better for the cows and produces higher-quality milk. It is one of the reasons that people pay roughly double for milk with the “USDA Organic” label.

Organic dairies, on the other hand, have an incentive to skimp on grazing: A grass-fed cow produces less milk; keeping a cow in a feed lot eating grain boosts production. Adding to the suspicions about the industry, there is statistical evidence of a curiously large increase in the amount of milk each organic cow is producing.

Why did the amount of organic milk rise almost three times as fast as the number of organic cows? Some of the increase in production is attributable to better practices, said Edward Maltby, chief of the Northeast Organic Dairy Producers Alliance. Some of it could be from the larger dairies reducing the amount of grazing to the very minimum required by the regulations.

“But the reason for such a large jump,” Maltby said, also has to do with “the increase in those mostly larger herds where the cows are fed in the barn instead of going out to pasture as the organic regulations require.”

Another reason for skepticism about whether the milk from these large dairies is truly organic arises from the perception that enforcement of “USDA Organic” standards has been lax.

To manage enforcement, the USDA relies on inspection agencies hired by the farmers. The Cornucopia Institute, a Wisconsin-based watchdog group representing small farmers and consumers, has filed repeated complaints against some of the massive dairies out West. But even when violations are reported, punishments can be mild.

Ten years ago, for example, the USDA found “willful violations” of organic standards at Aurora because of, among other things, a lack of grazing. In 2008, an inspection agency found that the Rockview Farms operation in Nevada was violating the organic pasture requirement and suggested that related dairy records could have been falsified. In 2010, an inspection agency proposed suspension of a large Arizona dairy, known as Shamrock, for denying pasture to its herd.

In those three cases, however, the USDA did not fine the dairies for the violations of organic rules even though the agency has the power to do so.

These investigations all began with Cornucopia, not the USDA or the inspection agencies. “The USDA has shown a remarkable lack of interest in whether these big organic dairies are really organic,” said Mark Kastel of the Cornucopia Institute. “Most times, they don’t even investigate. And when they find a problem, there’s very little punishment, if any. It’s a gross betrayal of the spirit of the organic law.”

Many retailers, thus far, have continued to trust the “USDA Organic” seal on milk from the large mega-dairies. The Post reported last month that, based on visits to pastures and a chemical analysis of the milk, Aurora appears to be falling short of organic grazing requirements. In response, Aurora said it operates according to organic standards.

Reactions from the major retailers that use Aurora milk as their house-brand milk were varied. Walmart would not say whether it will continue to use Aurora’s organic milk.

Costco said it has “investigated” but will continue to use Aurora: “Costco Wholesale has discussed with Aurora and otherwise investigated recent media statements concerning Aurora,” John Sullivan, a company senior vice president and general counsel, wrote in an email. “Costco has satisfied itself that its continued reliance on the [National Organic Program] certification of Aurora’s organic milk remains appropriate.”

From Albertsons: “Aurora is a minority supplier to Albertsons for our O Organic brand today and we will continue to ensure through our agreement with [inspection agency Quality Assurance International] that they are compliant with all Organic standards.”

The USDA said it is reviewing the information provided in The Post’s reporting, but others said the agency ought to be doing more enforcement. “The USDA ought to have boots on the ground at Aurora,” said Richard Mathews, former assistant deputy of the USDA office that oversees the organic program and other efforts. “But they don’t. They should be looking at farmers. They should be looking at certifiers. If they’re not doing that, they’re not doing it right.”

While consumers might picture organic milk coming from a small family farm, the reality is often quite different.

Much of that milk is being produced by huge dairies with thousands of cows, including a few with herds of more than 10,000 animals. By contrast, the average herd at an organic dairy is about 100 cows, and in Kalona the herd sizes are even smaller. The large dairies are staffed by employees rather than family members.

The difference between the mega-dairies and the typical organic dairy is not just a matter of scale. Most of the large, new dairies have emerged in Western states – Colorado, Texas, Arizona and New Mexico – where the weather is drier and pasture is harder to grow, but where the land is cheaper.

But it is the vast scale of the mega-dairies out West that raises suspicions around Kalona.

The larger the herd, the more pasture is required to feed it. But at a certain point, the acreage needed to feed a herd grows so large that it’s impractical to expect a cow to walk all the way to the pasture’s outer edges to graze and then back to the barn, typically twice day, to get milked. Some farms do have multiple milking facilities.

“We know with that high concentration of cows that it’s impossible to meet the grazing rule,” Swantz said. “They’re not organic. No way.”

During a break driving a steel-wheeled tractor over his fields, Amish farmer Glen Mast asked, “Fifteen thousand cows out there, and that’s certified organic?”

“The cows would go hungry looking for grass,” Miller said, asserting that the Iowa pasture is better than any out West. “Those cows probably get as much cactus as grass.”

The Kalona farmers say the organic movement dovetails with Amish ideals. The higher prices on organic products allow their small farms to turn a profit, allowing community members to stay on the farm and away from town. (Their tractors have steel wheels to lessen the temptation to head off the farm, too.) And some said they had harbored doubts about the health effects of the chemicals they had used on their fields before going organic.

“The Amish are more inclined to doing things naturally,” Mast said as his oldest son worked a tractor. Mast, 38, has seven children, ages 1 to 14. “We have large families, and we have a close connection to the soil.”

But critical to the future of organic dairy, several here said, is for the USDA and the inspection agencies to enforce the organic rules on the large players in the industry.

KALONA, IOWA — “The little guy is getting hurt here,” said Bill Evans, who shares ownership with a trust of Amish farmers of the processing company behind the Kalona SuperNatural brand. “The USDA really needs to apply the rules. Otherwise, it’s not a fair game.”

Biotech Energy Crop May be Regulated As Weed