In his first interview since being asked to serve by President Joe Biden, Vilsack told The Storm Lake Times that a “fairly significant shift” is occurring toward conservation agriculture that involves far more funding for existing mechanisms such as the Conservation Reserve Program and the Conservation Stewardship Program. He believes that he will have significant executive authority through the Commodity Credit Corporation and the latest Covid relief bill to fund efforts to build resiliency in natural resources and markets. Control of the Senate furthers the possibilities for another relief bill and renewable energy infrastructure program. 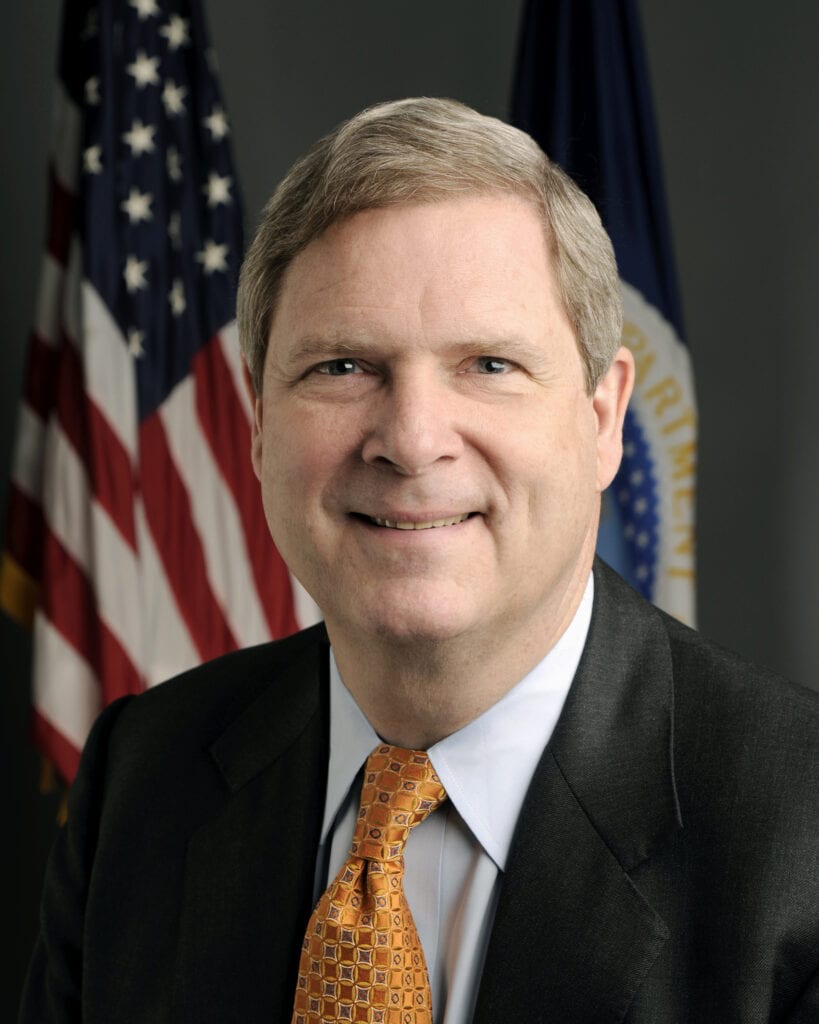 Vilsack envisions creating new markets that pay farmers and foresters to sequester carbon in the soil, funded by credits bought by carbon generators. He said he will create demonstration projects that can be incorporated as full programs into the next farm bill in two years. He said USDA will help develop scientific standards for carbon sequestration that are fundamental to creating a cap-and-trade program. World carbon markets are necessary as a way to pay to maintain delicate ecosystems such as the Amazon rain forest, dubbed “the lungs of the world.”

“We can create a whole new suite of revenue streams to protect from the vagaries of trade,” Vilsack said.

VILSACK, 70, former Democratic governor of Iowa, was the lone cabinet member in the Obama Administration to serve all eight years. He will become the only ag secretary in history to serve split terms, and could bid against Iowan James Wilson for longevity (Wilson served 16 years for Presidents McKinley, T. Roosevelt and Taft).

As such, he carries baggage that weighs on him from critics of corporate agriculture as being too cozy, and that he was not responsive enough to the concerns of Black and other disadvantaged farmers.

Vilsack was not auditioning for a reprise. He is a dairy export executive, has enjoyed being back in Des Moines near the grandchildren, and wasn’t necessarily hankering to return to the chicken-dinner circuit. Biden asked him to serve, upsetting some who wanted a fresh face. The Vilsacks and Bidens had developed a bond. Vilsack supported Biden when he ran for president in 1988, and Biden offered comfort to Tom and Christie Vilsack when they lost a young grandchild. Vilsack became a trusted Biden adviser.

Vilsack remains in Iowa until he is confirmed by the Senate. He does not know when he will move back to the Beltway.

Vilsack has been making the (virtual) rounds with constituent groups and received praise after meeting with Black farmers. Shirley Sherrod — a Black USDA employee who was fired by Vilsack at the urging of the Obama White House prematurely on the basis of a doctored audio from a right-wing media site (to whom Vilsack later apologized and offered her job back) — recently said that she was satisfied with Vilsack’s response to her. She said he would watch for him to follow-through.

“The reality is there are inherent, legacy barriers and practices that have prevented black farmers and socially disadvantaged producers from getting access to programs, and I want to do everything I can to remove those barriers,” Vilsack said.

“It’s going to be a new day and a better day for civil rights at USDA. We did good work, but we have a lot of work to do.”

He pledged to increase technical assistance to disadvantaged farmers, increase oversight of programs, strengthen the Civil Rights Office, and offer more assistance with debt and land access programs. He added that he wants to look at how USDA can clear out “inherent legacy biases.”

ASKED IF THE USDA will be a retread of previous years, Vilsack opened the interview by identifying eight priority areas “that need significant work or even historic work:”

A big reason Vilsack was picked was because he already understands how the sprawling department works, with authority from rural housing loans to soybean marketing loans.

“I know the department, I sense its challenges, and I have a sense of its capacity and resources. There’s a lot we can do immediately, especially around Covid relief,” Vilsack said. For example, local schools, food banks and restaurants are finding innovative ways to feed needy people. He wants USDA to help expand their flexibility and rapidly increase food supplies to growing populations of hungry people in the US. He intends to increase food stamp benefits.

He said USDA can use the goodwill of its national network of offices to build trust and help educate people about vaccination.

And, Vilsack said, he can use relief funds to start cultivating local food systems that help provide resiliency in a market dominated by a few big food processors.

“We can start to build that circular rural economy around resilience,” he said, drawing in institutions like schools, food banks, restaurants, growers and new regional processors. Regenerative agriculture provides crop and livestock diversity that feeds in to that circle. New jobs are created turning biomass into energy, or in smaller meat processing plants.

BIDEN MADE CLIMATE the center of his policy agenda, offering a $2 trillion package that puts agriculture at the core. Before the Iowa caucuses, for example, Biden proposed tripling the size of the Conservation Stewardship Program that rewards sustainable practices on working lands. The program has been popular but always underfunded. Similarly, Vilsack said the Conservation Reserve Program is under-utilized, and he thinks he has the authority to boost both. His authority to use CCC funds was stripped in 2010 by Congress, which later restored that spending authority to Trump Agriculture Secretary Sonny Perdue, who tapped the CCC for at least $50 billion for payments to farmers and agribusinesses to cover for trade wars. Vilsack couldn’t say how much is at his disposal immediately.

“Agriculture writ large is ready for this, much more than before,” Vilsack said, noting corporate enthusiasm for regenerative agriculture (which restores soil health through permanent plantings and more diverse crop rotations and grazing). The roster includes Cargill, General Mills, Kellogg and Starbucks interested in agricultural carbon sequestration, he noted, along with the Commodities Futures Trading Commission.

Vilsack and Gov. Jay Inslee of Washington shaped Biden’s thinking on agriculture and climate change, the new president said during an interview with The Storm Lake Times a year ago, just before the caucuses. Vilsack was campaigning with Biden then on the promise of sustainable agriculture and a new renewable energy economy.

Vilsack and Biden say they can create a whole new raft of high-paying jobs in wind, solar and biomass energy in rural areas to rebuild trust and confidence.

VILSACK CALLED FOR the recreation of an anti-trust task force in agriculture and food processing that was abandoned in the Trump Administration. Vilsack said he will pursue anti-trust litigation in conjunction with the Justice Department.

He sees it, again, as an issue of resilience. The big meatpackers, “if they don’t treat their workers right,” Vilsack said, can falter or fail under challenges like the Covid pandemic. The pork industry was hobbled by an ill workforce last spring, causing food prices to jump 50% almost overnight. He thinks the USDA can use markets to diversify food production with smaller processors catering to more diverse farm operations.

The American Farm Bureau Federation at its meeting last week called on more vigorous anti-trust enforcement, and for open and negotiated markets. Cattle producers have been frustrated for years over captive supplies, and the hog industry has been nearly completely integrated. Politicians from Rep. Randy Feenstra, R-Hull, to Sen. Elizabeth Warren, D-Mass., are on the same page when it comes to open markets.

Sen. Chuck Grassley, R-Iowa, wants to introduce Vilsack to the Senate on Jan. 28. That’s another reason Biden selected him — before two Georgia senate seats slid the Democrats’ way on Jan. 5, Biden was not sure he could get all his Cabinet through confirmation. Vilsack seemed a sure bet because he is viewed as a moderate. Vilsack believes he can bring some of those Republican senators along on the climate agenda, with the corporations that fund them.

“Look, nothing happens in a vacuum,” Vilsack said.

Michael Pollan’s Letter to the Future