Pesticides Are Killing the World’s Soils

They cause significant harm to earthworms, beetles, ground-nesting bees and thousands of other vital subterranean species 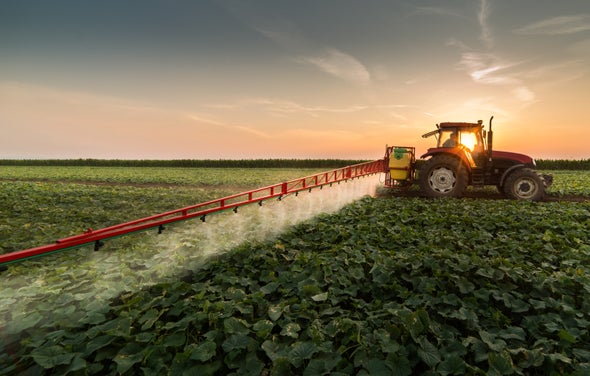 A farmer sprays pesticide on a field. Credit: Getty Images

Scoop up a shovelful of healthy soil, and you’ll likely be holding more living organisms than there are people on the planet Earth.

Like citizens of an underground city that never sleeps, tens of thousands of subterranean species of invertebrates, nematodes, bacteria and fungi are constantly filtering our water, recycling nutrients and helping to regulate the earth’s temperature.

But beneath fields covered in tightly knit rows of corn, soybeans, wheat and other monoculture crops, a toxic soup of insecticides, herbicides and fungicides is wreaking havoc, according to our newly published analysis in the journal Frontiers in Environmental Science.

The study, the most comprehensive review ever conducted on how pesticides affect soil health, should trigger immediate and substantive changes in how regulatory agencies like the EPA assess the risks posed by the nearly 850 pesticide ingredients approved for use in the U.S.

Our study leaves no doubt that must change.

For our analysis, conducted by researchers at the Center for Biological Diversity, Friends of the Earth and the University of Maryland, we looked at nearly 400 published studies that together conducted over 2,800 experiments on how pesticides affect soil organisms. Our review encompassed 275 unique species or types of soil organisms and 284 different pesticides or pesticide mixtures.

In just over 70 percent of those experiments, pesticides were found to harm organisms that are critical to maintaining healthy soils—harms that currently are never considered in the EPA’s safety reviews.

The ongoing escalation of pesticide-intensive agriculture and pollution are major driving factors in the precipitous decline of many soil organisms, like ground beetles and ground-nesting bees. They have been identified as the most significant driver of soil biodiversity loss in the last decade.

Yet pesticide companies and our pesticide regulators have ignored that research.

The EPA, which is responsible for pesticide oversight in the U.S., openly acknowledges that somewhere between 50 percent to 100 percent of all agriculturally applied pesticides end up on the soil. Yet to assess pesticides’ harms to soil species, the agency still uses a single test species—one that spends its entire life above ground in artificial boxes to estimate risk to all soil organisms—the European honeybee.

The fact that the EPA relies on a species that literally may never touch soil in its entire life to represent the thousands of species that live or develop underground offers a disturbing glimpse of how the U.S. pesticide regulatory system is set up to protect the pesticide industry instead of species and their ecosystems.

What this ultimately means is that pesticide approvals happen without any regard to how those pesticides can harm soil organisms.

To add to this, as principles of regenerative agriculture and soil health gain popularity around the world, pesticide companies have jumped on the bandwagon to greenwash their products.

Every major pesticide company now has Web materials touting its role in promoting soil health, often advocating for reducing tilling and planting cover crops. As general principles, both of these practices are indeed good for soil health and, if adopted responsibly, are great steps to take.

However, pesticide companies know that these practices are often accompanied by increased pesticide use. When fields aren’t tilled, pesticides are often used to kill weeds, and cover crops are often killed by pesticides before crop planting.

This “one step forward, one step back” approach is preventing meaningful progress to protect our soils. Pesticide companies have so far been successful in coopting “healthy soil” messaging because our regulators have demonstrated no desire or willingness to protect soil organisms from pesticides.

The long-term environmental cost of that failure can no longer be ignored.

Soils are some of the most complex and biodiverse ecosystems on the planet, containing nearly a quarter of the planet’s diversity.

Protecting them should be a priority, not an afterthought.

Our research indicates that achieving this will require that we face the task of reducing the world’s growing and unsustainable addiction to pesticide-intensive agriculture.

And it will require that the EPA take aggressive steps to begin protecting the health of our soil by addressing the well-documented harms of pesticides to our long-overlooked subterranean species.

This is an opinion and analysis article.

Kevin Folta’s Statements are Hazardous to Your Health