Ten years ago, the poultry muscle disease known as white striping was almost nonexistent. Now, the fat-boosting ailment shows up in 99% of U.S. store-brand chickens, according to a Humane League study to be released Monday.

The animal-welfare nonprofit conducted an investigation in 29 states that found the affliction in virtually all grocery-store-brand chickens sampled. The illness is driven by the extreme conditions of factory farming, which turbocharges the raising process to a matter of weeks and puts undue physical stress on the animals, the Humane League said.

The disease’s name comes from its visible side effect: thin white stripes that appear on the meat’s surface. With the chickens unable to bear the weight of their own bodies, the disease causes the birds to replace some of their muscle tissue with fat. 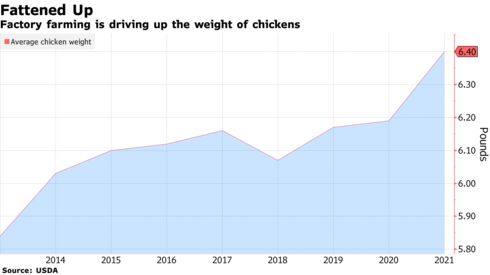 Factory farming is driving up the weight of chickens

As a result, chickens with white striping have fat content that is 224% higher than those without the affliction. The illness also decreases the meat’s protein content by 9%. Affected meat doesn’t taste any different than normal chicken, however.

Of the 16 major supermarket chains surveyed, Walmart Inc., BJ’s Wholesale Club Holdings Inc. and Meijer Inc. were found to carry chicken products with the most severe levels of white striping.

Chicken producers have wrangled with the adverse effects of fattening up their chickens before. In 2016, the birds were plagued with a “woody” texture. Since then, despite pledges to seek lower average weights, little has changed on the fattening front.

“Consumers just really don’t have a choice right now, which is frustrating,” said Michael Windsor, the corporate projects lead at the Humane League. “If you wanted to avoid white-striped chicken, they’re just not offering it.”

How Monsanto Took Control of Our Food System