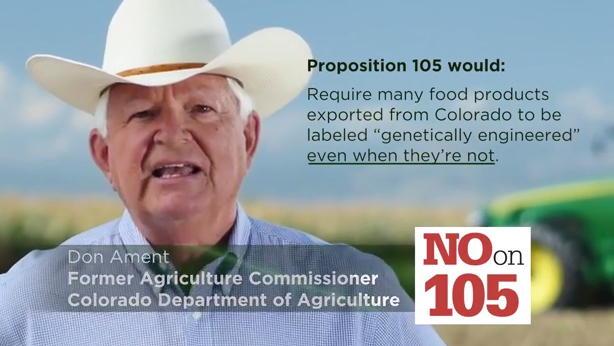 Monsanto is donating $4.7 million to the campaign to oppose GMO labeling in Colorado.

Monday was the latest deadline for candidates and committees to report campaign contributions and expenditure to the Secretary of State’s office.

Monsanto’s contribution is the largest of the most recent reporting period from Sept. 11 to 24. The St. Louis-based agriculture company is a primary producer of genetically modified seeds.

The No on 105 committee has raised almost $10 million through Sept. 24, with Pepsico and Kraft Foods also giving more than $1 million each. The group begins running TV ads against the initiative this week.

Democratic Gov. John Hickenlooper continued to outraise his GOP opponent Bob Beauprez in the most recent reporting period, bringing in more than $307,000 to Beauprez’s $202,000.

Beauprez loaned his campaign $527,000 to win his four-way Republican primary earlier this year but has yet to spend his own money on the general election.

Here’s a look at fundraising in the most recent period and money in the bank for all statewide candidates:

And here’s a look at the totals raised and spent for statewide candidates:

Outside groups are on track to spend more on the governor’s race than the candidates. The Republican Governor’s Association (RGA) has raised $5 million and spent almost $3.8 million, including more than $830,000 spent in the most recent two weeks. The RGA began running more ads opposing Hickenlooper this week, with more than $3 million in ads scheduled.

Making Colorado Great, a committee that supports Hickenlooper, received another $650,000 from the Democratic Governor’s Association in the most recent filing period, bringing that group’s donations to $1.15 million out of almost $2 million the group has raised. The group has scheduled $4.4 million in ads opposing Beauprez.

Meanwhile, there’s a new independent expenditure group called Business Leaders Who Support Hickenlooper. That group organized last Friday, so its first report of contributions and spending isn’t due until Oct. 14.

Outside groups are also active in competitive state legislative races. Here are a few of them:

The next filing date for candidates and committees is Oct. 14.